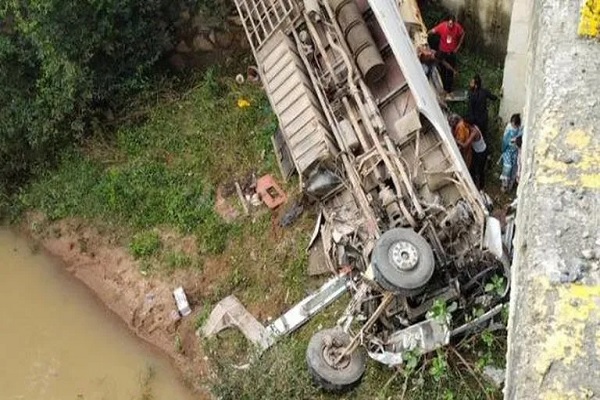 At least seven people were killed and many others injured after a bus carrying around 50 passengers fell off a bridge in Jharkhand’s Hazaribag district on Saturday, police said.

The accident took place when the Ranchi-bound bus coming from Giridih district broke the railing of the bridge and fell into a dry spot in Siwanne River in Tatijharia Police Station area, Superintendent of Police Manoj Ratan Chothe said.

“Two passengers died on the spot and five others succumbed to their injuries. The fatality figures may go up as several are seriously injured,” he said.

Several passengers were trapped inside the bus and they were rescued.

The damage could have been more had the bus fallen into water in the middle of the river, the officer said, adding an investigation is underway to ascertain the cause of the accident.

A DSP-rank officer and three police station in-charge were deputed to the spot to monitor the rescue operation, the SP added.

Mamta Saluja, a passenger who received minor injuries in the accident, said, “There were Sikh pilgrims in the bus going to a gurudwara in Ranchi’s Ratu area to participate in a religious function.” President Droupadi Murmu and Prime Minister Narendra Modi expressed grief over the loss of lives in the accident.

“I am deeply saddened by the news of the death of people in a road accident in Hazaribag, Jharkhand. My heartfelt condolences to the families who lost their loved ones in this accident. I wish all the injured to get well soon,” Murmu said.

Modi said, “Anguished by the loss of lives in the bus accident in Hazaribag district, Jharkhand. In this tragic hour, my thoughts are with the bereaved families. Praying that the injured recover soon.” Governor Ramesh Bais and Chief Minister Hemant Soren also condoled the deaths.

“Saddened by the deaths caused due to falling of a bus from a bridge in Tatijharia. May God give peace to the departed souls and strength to the bereaved families. I wish speedy recovery to the injured,” Soren tweeted.

The Governor said in Twitter post, “Deeply saddened to hear about the news of deaths due to falling of a bus from a bridge at Tatijharia, Hazaribag. My deepest condolences to the bereaved families and wish the injured a speedy recovery.”