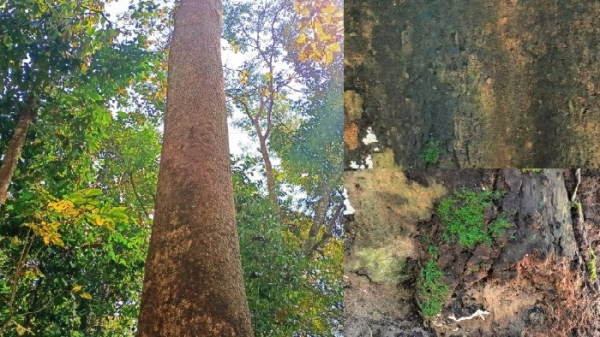 Anisur Rahman, forest beat officer of Lawachara, said that the leaves of the ‘African teak’ tree, a rare species of 100 feet in height and 12 feet round, have recently fallen and rotted at the base of the tree. “The tree is thought to be dead,” he informed.

Sylhet Divisional Forest Officer Md. Rezaul Karim Chowdhury said there were “two African teak trees” at Lawachara National Park. Of the two trees, one was uprooted by a storm in 2006. The only tree in the park has fallen leaves and is rotting at the base. The tree is estimated to be 90-92 years old.

It is learned that no propagation was possible from the tree despite many efforts. The ‘African teak’ tree had no leaves. Even if the flowers were caught, they would fall. A few years ago, cuttings were collected from that tree, but no result was found.

It is known that in 1930, a British official came to Lawachara National Park located in Kamalganj. At that time, most of the trees in the natural protected forest were cut and artificially planted with saplings of different species including Monkey Jack, Teak, Rhizophora apiculata, Xylia kerri, and Red sandalwood.

It is believed that these trees also contained two seedlings of African teak. The only African teak tree in Bangladesh is known to the locals as the “unconscious tree”. It is said that if a passerby walks past this tree or stands under it, he would faint.

Studies have shown that this tree contains carbolic acid and chloroform. Due to this, many people may feel sleepy if they stand near the tree for a long time. Again there is a possibility of a burning nose and throat and asthma as side effects.

The tree was standing tall in front of the Lawachara Forest Bit office. As the African teak tree died, this species was also extinct from the country. The dead tree now stands tall among thousands of trees.