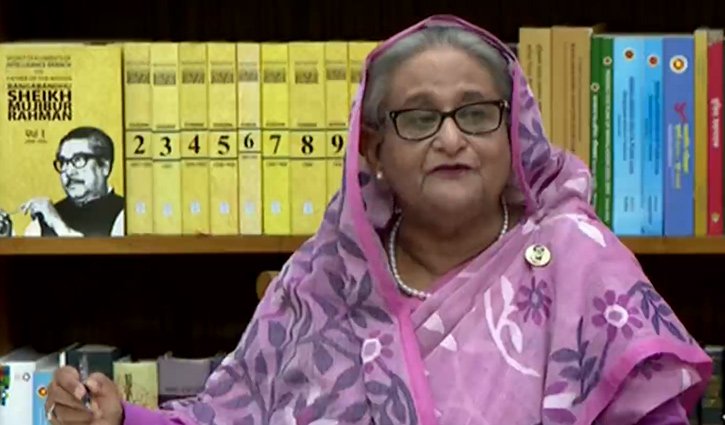 Prime Minister Sheikh Hasina today (October 6) assured the countrymen that there is nothing to be worried as Bangladesh’s economy is in a quite strong position.

“Bangladesh’s economy, in terms of midterm and long-term aspects, is at no risk. I can ensure all of you that there is nothing to worry,” she said.

The premier made this assurance while addressing a press conference about the outcome of her recently concluded official visit to the United Kingdom and the United States of the America.

Mentioning that the government has put concentration on making the economy vibrant overcoming all challenges, she said that they’ve given emphasis on the issue of mitigating people’s sufferings of any kind.

She said, “There is no issue to worry…if we all think that this is our country and we all together have to pull the country ahead.”

Sheikh Hasina said that in the USA she urged the expatriate Bangladeshis to convey her messages to their respective near and dear ones at home to ensure the maximum utilisation of their every inch of land and produce whatever they can.

She said whenever Awami League (AL) comes in power it pulls the country ahead. “So, I can say that we will be able to achieve the target of overall economic indicators.”

“But, our people have to remain conscious,” she added.

Besides, she said that there is nothing to be worried about the foreign exchange reserves because in 1996, AL government started journey with US$ 1 billion in reserve, while at that time, electricity generation was 1,300 megawatts, food shortage was 4 million metric tons and the literacy rate was only 45 percent.

The premier said, “I can promise that there is no risk in Bangladesh in any case.”

She said that it is true that Awami League could not come to power in 2001 only for domestic-foreign conspiracy due to non-provision of gas sales to foreign countries. “But if it had done so, it would not have been possible to continue electricity transmission even with some load shedding today, the country would have plunged into darkness.”

After assuming power, she said, the AL government has opened up every sector to the private sectors.

Sheikh Hasina said that she has confidence and trust in the people and that is why they have taken the decision.

At the beginning of the press conference, the premier read out a written statement regarding her engagements in the UK and the USA.

In the written statement, she said during her stay in the UK and New York from September 15 to 24, she took part in the funeral of Queen Elizabeth II in London and the 77th United Nations General Assembly (UNGA) alongside nine high level meetings and side events._BSS.