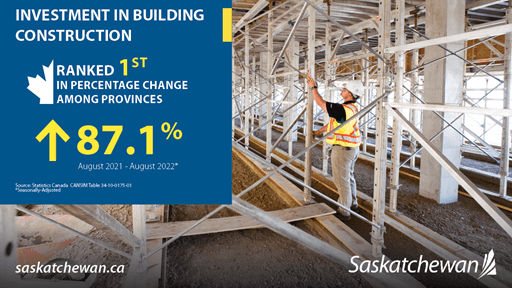 Saskatchewan First Among The Provinces In Year-Over-Year Growth

on 17th October, Statistics Canada released August 2022 investment in building construction numbers, showing Saskatchewan with a significant increase of 87.1 per cent compared to August 2021, ranking first among the provinces in terms of percentage change.

The value of building construction investment in August 2022 was $491 million.

“Today’s strong Statistics Canada numbers are just another sign that our economy continues to grow,” Trade and Export Development Minister Jeremy Harrison said. “Our government is committed to growth that works for everyone, and these numbers are further proof that we remain one of the best places in Canada for businesses and workers.”

In the first eight months of 2022, investment in non-residential construction was up by 31.2 per cent, compared to the same period in 2021, placing Saskatchewan third among the provinces in terms of percentage change.

Saskatchewan has seen strong growth in recent months in several key economic sectors. In August 2022, the value of wholesale trade jumped by 73.7 per cent compared to August 2021 while manufacturing sales rose 28.9 per cent during the same period. Merchandise exports also increased by 54.7 per cent in August 2022 compared to August 2021, ranking first among the provinces, and in September 2022, the province’s unemployment rate fell to 4.1 per cent, the lowest among provinces, and well below the national average of 5.2 per cent (seasonally adjusted).

The Green Party of Canada is moving