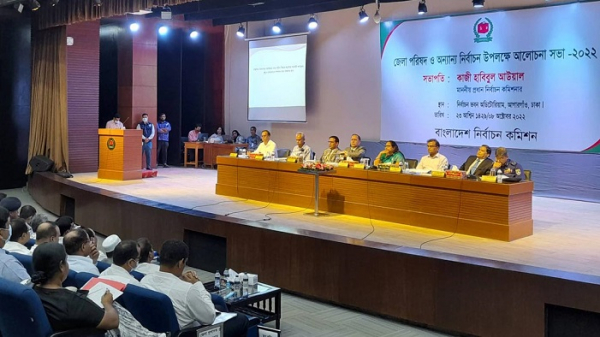 Chief Election Commissioner(CEC) Kazi Habibul Awal said that the 12th parliamentary election will be held in December 2023 or January 2024.

He announced this in a meeting with Deputy Commissioners and Superintendents of Police in the auditorium of the Election Commission (EC) Secretariat on Saturday morning.

He also said that Zilla Parishad elections will be held on October 17. Then there are two by-elections to the National Assembly. Besides, the twelfth national parliament election will be held in the last quarter of next year (the year 2023) or at the beginning of 2024.

Kazi Habibul Awal said that the District Commissioners and Superintendents of Police perform important duties in close proximity to the people by virtue of their position as the top officials of the district administration. You must have realized the importance of forming a government and local government through elections in a democratic governance system. The purpose of this meeting is to discuss and exchange views on the joint responsibilities, roles, and actions of you and the commission regarding all constitutional and statutory elections. Hopefully, the meeting will be successful and fruitful through effective discussion and exchange of views.

Apart from the DC-SP, senior secretaries of the public security department of the home ministry and senior police officers were also present in the meeting.