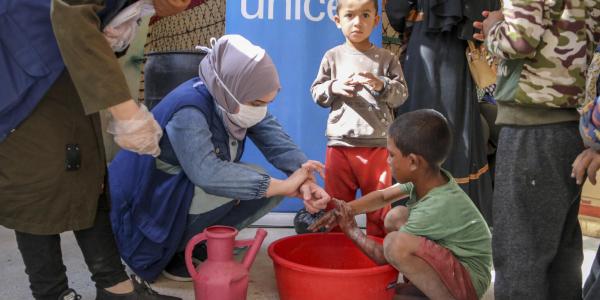 “The fast pace of the cholera outbreak in Syria and Lebanon is alarming and the risks of the disease further spreading to other countries in the region call for immediate action. Urgent support is needed to respond and contain the spread of the disease.

“The acute epidemic in Syria has left over 20,000 suspected cases with acute watery diarrhoea and 75 cholera-associated deaths since its start [1]. In Lebanon, confirmed cholera cases reached 448 in just two weeks, with 10 associated deaths .

“Several neighbouring countries are already affected with a high number of acute watery diarrhoea cases and may be at risk of cholera.

“Cholera outbreaks and acute watery diarrhoea add to children’s struggles in these countries. Malnourished children are more vulnerable to developing severe cholera disease, and the cholera outbreak is yet another blow to already overstretched health systems in the region.

“Cholera doesn’t know borders and lines of control, and spreads along population movements, including displacements. In hard-hit countries, the spread of the disease is fueled by weak water and sanitation systems, poor water management, increased poverty, climate change, and conflicts – all of which make safe water more and more scarce for families and their children and reliance on unsafe water exposes them to the risk of contracting the water-borne disease.

“Since the start of the outbreak, UNICEF has been delivering lifesaving health and water, hygiene, and sanitation supplies and services to affected areas, while helping families improve their hygiene practices. Simultaneously, preparedness and response efforts are being stepped up in neighbouring countries.

“UNICEF urgently needs US$40.5 million to expand its emergency cholera response in Syria and Lebanon alone. This includes support in health, water, hygiene and sanitation, risk communication and community engagement in the next three months.”

Suspect Who Shot at Police in Custody