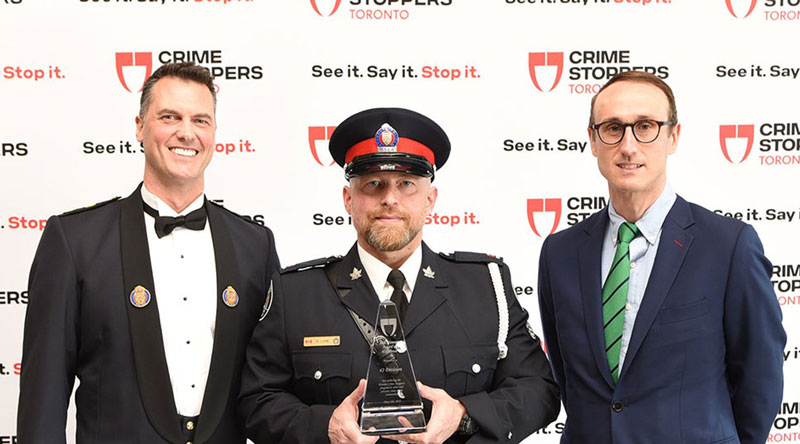 “These are record-setting numbers that were achieved despite working through a global pandemic,” Ramer said at the 24th annual TCS Chief of Police dinner on May 4. “These efforts have earned them an international reputation for excellence and have made them one of the most successful Crime Stoppers programs in the world.”

Funds accrued from the annual dinner and a golf tournament support the program.

“The generous donations you are making tonight will be reinvested to ensure the safety of our communities,” Ramer said.

Launched in 1984 after then-Chief Jack Marks asked retired S/Supt. Gary Grant – a Sergeant at the time – to start the initiative, the TCS program is the first in the world to remove individual reward payouts for tips, replacing it with a Community Awards Program that seeks opportunities to support crime prevention through community engagement and improvement initiatives.
“Since launching the rebrand strategy in January 2020, TCS has experienced record-setting results,” said Chair Sean Sportun.

“In addition, we have been able to launch several initiatives that have positively impacted communities across our city,” said Sportun. “They span from the complete remodel of an after-school youth program in a challenged community and a refreshed playground in a community where two young girls were shot, to the release of the second edition ‘Captain Canuck’ comic book with a story line to educate youth on the value of reporting illegal firearms and an innovative initiative that brought awareness to the growing issue of auto theft through technology.”
An award to honour Grant was unveiled in 2019. This year’s Gary Grant Media Excellence Award was presented to CHIN Radio.

“CHIN Radio has been very instrumental in the success of Crime Stoppers,” said Grant. “This is one of the multi-faceted media that has been very supportive of the program by allowing us to get our message out. They have been a true and valuable partner in our multi-cultural city.”

“It is very important to get the Crime Stoppers messages out in a language that people understand,” he said. “That is our job.”

Constable Martin Douglas and 42 Division were the recipients of Bill Hancox Memorial Awards of Excellence.

On August 4, 1998, Hancox died in the line of duty after he was stabbed while working undercover. A Crime Stoppers tip led to the solving of his murder.
On June 14, 2018, two girls – ages nine and five – were shot while playing in a park at Alton Towers Circle in Scarborough.

Sheldon Eriya was arrested the next day and, on June 17, police identified the two other men they allege were involved in the shooting.

Tarrick Rhoden was arrested in August 2018 by the Ontario Provincial Police Minden detachment while Robertson was on the run until July 2020 when he was nabbed. He pleaded guilty to attempted murder and aggravated assault and was sentenced to 13 years in prison.

“The relentless pursuit by members of 42 Division never halted and they strategically partnered with the BOLO Program and Toronto Crime Stoppers to put out an amplification campaign in an effort to generate tips on the accused’s whereabouts,” said BOLO Program Director Maxime Langlois.  “By the anonymous nature of Crime Stoppers, crimes that are solved by Crime Stoppers in the media are often forced to go unrecognized. The Board of Directors is glad of opportunities such as the Chief of Police Dinner where the units and officers that work on the tips, make the arrests and keep Toronto the safest city to live in can be fully recognized.”

Inspector Michael Williams and Detective-Constable Michael Lane accepted the award on behalf of the Scarborough division.

A graduate of Cedarbrae Collegiate Institute, Douglas joined the Service 23 years ago.

As a School Resource Officer at Sir Robert Borden Business & Technical Institute, he took time out from his busy personal and professional schedule to volunteer his service as coach of the school’s football team and organized a banquet to honour members.

To bridge the gap between youth and police, Martin started mentoring and organizing after-school programs, including ‘Krumping Out Crime’, which saw kids get to try out the energetic street dance and compete against other schools.

He was the TCS Youth & Social Media Officer before transitioning last year to the Sex Crimes Unit.

“Martin’s commitment to excellence extended far beyond his responsibilities as the Crime Stoppers Youth Engagement Officer,” said Sportun. “Through his leadership and other initiatives, he encouraged other police officers to get involved in various youth outreach projects that helped change the perspective many young people have of police,”
Grant and original TCS Board member Cal Millar along with former TCS police co-ordinators Sergeants Jeff Zammitt and Chris Scherk and Detective-Sergeant Dimirti Tsianos were also recognized at the event.

“It has been an honour to serve with Toronto Crime Stoppers and it is encouraging to see how our program has evolved and advanced from a reactive to a proactive program,” Sportun said. “But what I am most proud of is the commitment and dedication of those involved with the program who give of their time and work tirelessly to improve the safety of our city for an enhanced quality of life for the citizens of Toronto.”

Crime Stoppers is the brainchild of Canadian-born Greg MacAleese, who was an officer with the Albuquerque Police Department in New Mexico. After running out of leads in a homicide investigation, the frustrated cop turned to the public for assistance in 1976.

He produced the first crime re-enactment that was aired on local television and made available to other media outlets and promised that anyone providing information leading to an arrest would be eligible for a cash reward.

Within hours of the broadcast, police received a tip that led to the arrest of two suspects who were charged with murder. They were sentenced to life terms with no chance of parole.
Toronto, which implemented the initiative 38 years ago, has one of the largest programs in the world. There are close to 1,300 Crime Stoppers programs in nearly 20 countries.
Anyone with information about a crime that has occurred, or about to happen, can make an anonymous tip to Crime Stoppers at 1-800-222-TIPS (8477) or online at www.222tips.com