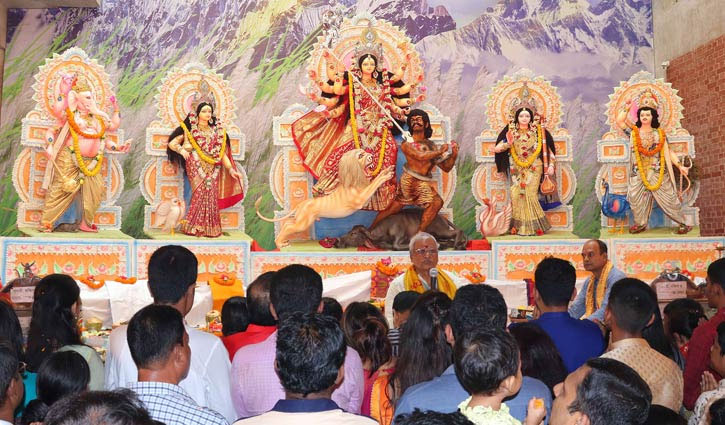 Durga Puja, the biggest religious festival of Bengali Hindu community, began today, on Saturday (October 1) with Maha Shasthi puja at temples across the country amid festivity and religious fervour.

The five-day-long Durga Puja celebration begins with the unveiling of the face of the deity and Kalparambho on the day of Maha Sashthi and it will come to an end on October 5 with the immersion of the idols of goddess Durga in rivers and other water bodies.

President M Abdul Hamid and Prime Minister Sheikh Hasina have given separate messages on the occasion of the Durga Puja extending greetings to Hindu community members.

Swami Premananda Maharaj of Ramkrishna Mission and Ramkrishna Math, Dhaka said Goddess Durga will come to earth (martyalok) from heaven (Kailash) riding on elephant which signifies, as per mythology, that the earth will witness natural disasters like storms but production of grains and crops will increase.

Goddess Durga will return to heaven (Kailash) riding on boat which signifies the world will get blessings.

Maha Nabami Puja will be held on the fourth day on October 4 at 6.30am and offering of pushpanjali or anjali at 10.30am.

On the final day of Bijaya Dashami, puja will begin at 6.30am, pushpanjali at 8am and puja completion and Darpan Bisharjan will be held by 8.50am.

The five-day festival will end with immersion of idols of goddess Durga and her offspring – Ganesha, Karitik, Laxmi and Saraswati – and devotees will receive Shantijol (sacred water from where deities are immersed).

The Mahalaya, the auspicious occasion heralding the advent of goddess Durga, was celebrated on September 25.

Durga Puja is being celebrated at 32,168 mandaps across the country this year including 241 in the capital, according to Bangladesh Puja Udjapan Parishad.