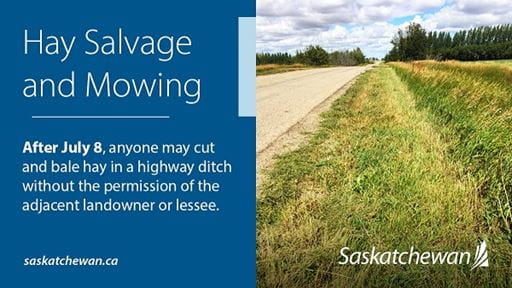 During summer in Saskatchewan, farmers can salvage hay along provincial highways which provides an opportunity for those in need of feed for livestock. According to the Government of Saskatchewan, anyone may cut and bale hay, any time after July 8, without permission from the nearby landowner, provided mowing/salvage operations haven’t already begun.

Cutting grass along provincial highways provides many benefits as it optimizes snow storage in ditches which reduces drifting on the road surface during the winter. At the same time, it provides a neat appearance improving visibility and control of brush and noxious weed growth.

The ministry delivers the mowing program with the assistance of contractors. This year, approximately 41,000 hectares were tendered. The first cut began last month and focused on the northern region.  The second cut of mowing will begin as early as July 15. Mowing in the west central and southwest regions including Swift Current and North Battleford Districts begins August 15. This allows additional time to salvage hay in anticipation of below normal moisture conditions.

The Government of Saskatchewan is planning to improve more than 1,100 km of provincial highways this year, for a total of 3,500 km over the past three years. The government has set a 10-year Growth Plan target of improving 10,000 kilometres of highways. With this year’s improvements, the province is ahead of the pace needed to meet this target.