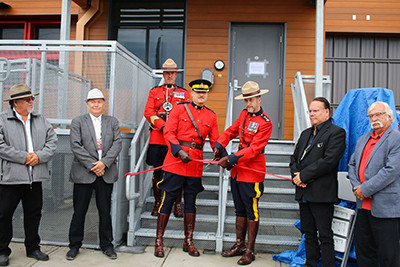 The detachment, situated in downtown Norway House, was built after extensive consultation with the communities from Kinosao Sipi Cree Nation and Norway House with regards to site selection and design elements. It replaces the former detachment which was built in 1973.

“This project really epitomizes what the RCMP continues to strive for – community engagement and consultation when it comes to our presence in the community,” says Superintendent Ryan Mitchell, Officer in Charge of Manitoba RCMP’s North District. “In the lobby, there are graphics along the walls that depict the Seven Sacred Teachings. These teachings align very closely with the RCMP’s Core Values, and serves as a reminder to us on a daily basis on how we want to lead and serve our community.”

The building is a modular construction of 16 units that was completed in Vonda, SK before it was transported to Norway House. At 859 sq. metres, it is almost double the size of the former detachment (460 sq. meters) and features several improvements including a larger exhibit room, secure bay, garage bay, file storage, police equipment room, and a significant back up power generator that will ensure continuity of service to the community. Construction started in June 2020 and was completed in early May 2022. The total cost of the project is approximately $18.1 million.

“Ultimately, a detachment truly belongs to the communities it serves,” says Assistant Commissioner Rob Hill, Commanding Officer of the Manitoba RCMP. “To the residents of Norway House and Kinosao Sipi Cree Nation, thank you for sharing your thoughts as local experts of this area. We will continue to be there for you when you need us the most.”