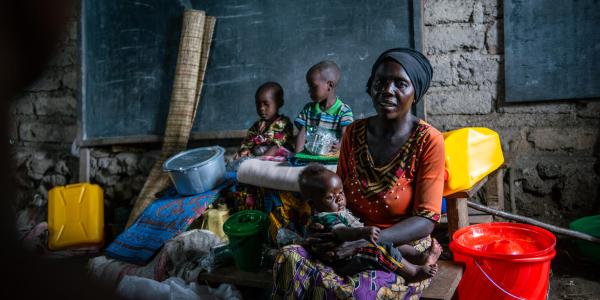 Thousands of children fleeing fighting in the eastern Democratic Republic of the Congo (DRC) are at grave risk in overcrowded and unsanitary camps for internally displaced people (IDPs), UNICEF warned today.

As the scale of the crisis escalates, with new IDPs arriving daily, humanitarian access is becoming more restricted because of the deteriorating security situation in eastern DRC. Fighting in the east of the DRC between the Congolese armed forces and non-state armed group M23 has intensified since 20 October 2022, displacing thousands of people from Rutshuru territory in North Kivu province mainly to Kanyaruchinya and Kibati, north of the city of Goma and to Lubero territory.

“Internally Displaced camps are fraught with danger,” said UNICEF Emergency Manager Dounia Dekhili. “In addition to the cholera threat, children and young people are at risk of experiencing Gender-Based Violence in the extremely cramped camps.”

Conflict is notably expanding further north and south along the Rutshuru-Goma axis leading to massive population displacements. The displaced would join the ranks of about 200,000 Internally Displaced People  who were forced to flee their homes since the beginning of the latest surge in violence in Rutshuru territory in late March 2022.

About 100,000 people who have been displaced over the last 10 days have fled to hastily formed and desperately overcrowded makeshift camps in the towns of Goma and Lubero. They are living in flimsy shelters which do not protect them from frequent rainstorms. Shortages of clean water are placing many IDPs at risk of a cholera epidemic.  Many displaced do not have tarpaulins and are forced to sleep in the open.

“There are nearly 190 children who have been separated from their families or caregivers during the chaos of recent displacements and so far we have reunited about 80 with their families in Nyriragongo territory alone,” added Dekhili. “The likelihood is that more unaccompanied children and children associated with armed conflict will almost certainly materialise as the crisis unfolds. Providing people with drinking water, latrines and sufficient food is also proving to be a major challenge. It is no exaggeration to say that the lives of thousands of people who live in these camps are in grave danger.”

Despite the volatile and unpredictable environment, UNICEF and partners continue to provide WASH, child protection, health and nutrition services to the most vulnerable. In the longer term, efforts are underway to reopen schools.

UNICEF and its partners have initiated water trucking activities in Kanyaruchinia and the surrounding areas in Nyriragongo – every day about 100 cubic meters of drinking water is provided to displaced populations.

In addition, emergency health and nutrition care to prevent severe malnutrition are being provided to IDPs and the host community.

“The priorities now are to provide access to safe water and sanitation, to work with sister agencies and partners to deliver food and to improve the quality of shelters,” said Jean Metenier, chief of the UNICEF Goma Field Office. We call on all parties to the conflict to refrain from violence, protect children and their parents and pursue peace. The suffering here has to end immediately.”