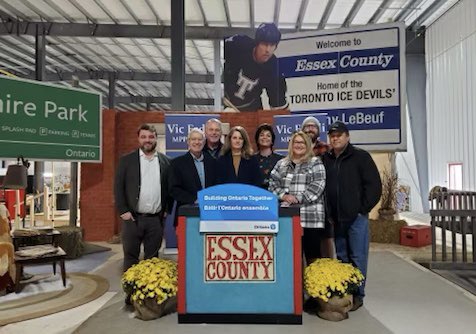 “Our government is proud to support the film and television industry in Northeastern Ontario, which continues to create good jobs and develop skilled local talent,” said Vic Fedeli, MPP for Nipissing. “Today’s funding is helping solidify the North’s reputation as a first-rate production centre in North America and the world.”

“Making targeted investments in Northern Ontario’s growing film industry is a priority for our government,” said Greg Rickford, Minister of Northern Development. “These investments are strengthening this vital sector, attracting talent and creating jobs in our northern communities.”

“Ontario has a booming film and television industry across the province and in the North,” said Neil Lumsden, Minister of Tourism, Culture and Sport. “With this investment, our government is attracting more projects that showcase our stunning northern landscapes, create jobs and boost our provincial and local economies.”

The NOHFC promotes economic prosperity across Northern Ontario by providing financial assistance to projects—big and small, rural and urban—that stimulate growth, job creation and skills development. Since June 2018, the NOHFC has invested more than $559 million in 4,748 projects in Northern Ontario, leveraging more than $1.82 billion in investment and creating or sustaining over 7,500 jobs.