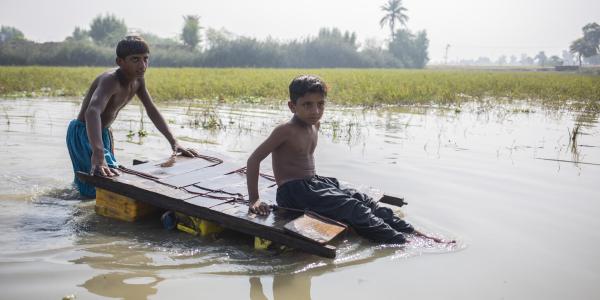 As COP27 gets underway in Egypt, UNICEF warns this year has brought overwhelming flooding to at least 27.7 million children in 27 countries worldwide.

A large majority of the 27.7 million children* affected by flooding in 2022 are among the most vulnerable and are at high risk of a multitude of threats including death by drowning, disease outbreaks, lack of safe drinking water, malnutrition, disruption in learning, and violence.

“We are seeing unprecedented levels of flooding all around the world this year, and with it, an explosion in threats to children,” said Paloma Escudero, head of the UNICEF delegation for COP27. “The climate crisis is here. In many places, the flooding is the worst it has been in a generation, or several. Our children are already suffering at a scale their parents never did.”

The aftermath of floods is often more deadly for children than the extreme weather events that caused the flooding. In 2022, floods have contributed to the increased spread of major killers of children, such as malnutrition, malaria, cholera and diarrhea:

In addition to threatening the lives of millions of children, the flood waters have disrupted essential services and displaced countless families:

“COP27 provides an opportunity to chart a credible roadmap with clear milestones for finance for climate adaptation and solutions for loss and damage,” said Paloma Escudero. “Young people from the most affected places on Earth are drowning in climate inaction. Enough is enough. Lives are on the line – children need action now.”

As well as pressing governments and big business to rapidly reduce emissions, UNICEF urges leaders to take immediate action to protect children from climate devastation by adapting the critical social services they rely on. Adaptation measures, like creating water, health and education systems that stand up to flooding and drought, will save lives.

Last year, developed countries agreed to double support for adaptation to $40 billion a year by 2025. At COP27, they must present a credible roadmap with clear milestones on how this will be delivered, as a step to delivering at least $300bn per year for adaptation by 2030. At least half of all climate finance should flow towards adaptation.

UNICEF also urges parties to find solutions to support those who will face climate losses and damages beyond the limits of what communities can adapt to. UNICEF is calling on governments to close the finance gap for addressing these irreversible changes for children.

AT COP27, UNICEF CALLS ON ALL PARTIES TO:

UNICEF is working to strengthen resilience of communities and health infrastructure to withstand disaster-related hazards, and increasingly linking our work on humanitarian response and longer-term climate adaptation.