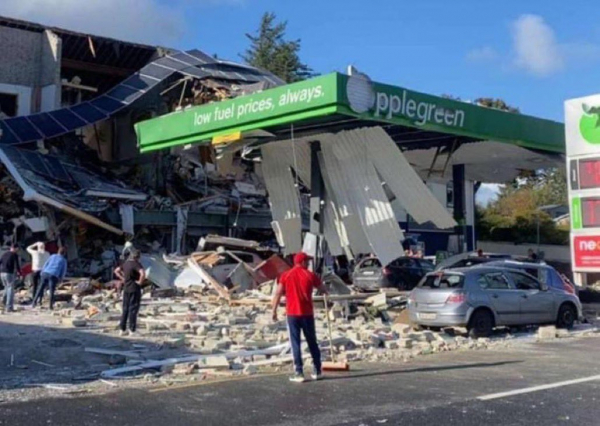 At least nine people have been killed in an explosion at a petrol station in County Donegal in northwest Ireland, authorities said, adding that search and rescue efforts were ongoing.

The police updated the death toll on Saturday, a day after the explosion at about 3pm local time (14:00 GMT) at the Applegreen petrol station on the outskirts of the village of Creeslough.

Eight more people were receiving treatment in hospital, police said. They have not addressed the cause of the explosion. “The search and recovery for further fatalities continue,” a police statement said.

Photographs from the scene showed a residential unit above the petrol station’s store with walls blown out and a partially collapsed roof, and debris scattered across the forecourt where several cars were parked.

A major emergency response operation involving first responders from both sides of the Irish border extended through the night and was continuing on Saturday morning. Among those gathered at the cordon on Friday night were relatives of people believed to have been in the buildings at the time.

Sniffer dogs are being used amid the rubble. At one point on Friday night, all machinery was turned off and onlookers were asked to remain completely silent as rescue workers attempted to detect survivors beneath the debris.

Irish Prime Minister Micheal Martin said the incident was a tragedy for a small community of just a few hundred people.

“People across this island will be numbed by the same sense of shock and utter devastation as the people of Creeslough at this tragic loss of life,” Martin said in a statement late on on Friday.

“I wish to express my deepest sympathies to their family, and friends, and to the entire community of Creeslough, on this darkest of days for Donegal and the entire country.”

Local Sinn Fein lawmaker Pearse Doherty said at the scene on Friday that the “massive explosion” was heard from miles around and hours later people were still trapped inside the building, with some making contact with the emergency services outside.

He said the petrol station was the only supermarket in the village, also housing a post office and hairdressers and that it would have been very busy at that time, just at the end of the school day on a Friday.

On Friday night, a coastguard helicopter airlifted some of those who were injured in the explosion from Letterkenny University Hospital to Dublin.

Neighbouring Northern Ireland’s air ambulance was also deployed, as were fire crews and ground ambulances from the region.

Letterkenny hospital appealed to the public not to attend its emergency department unless it was urgent.

The hospital initiated its major emergency standby protocol earlier on Friday. It stood down the protocol late on Friday night.

In a statement, the hospital said: “The hospital continues to treat those injured in the incident at Creeslough, Co Donegal, and remains on hand to provide all necessary medical assistance required.”

BNP-Jamaat movement has no proposal to overcome crisis: Inu