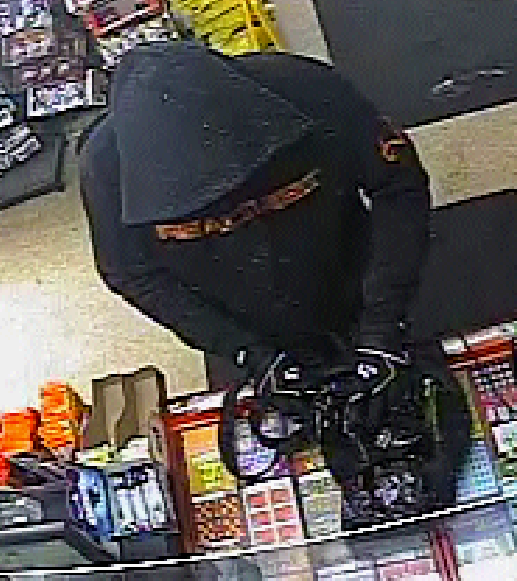 The Codiac Regional RCMP is asking for the public’s help to identify a person of interest following an armed robbery at a business in Moncton, N.B.

On December 13, 2022, at approximately 9:30 p.m., an individual entered a convenience store on Mill Road in Moncton, brandishing a firearm and demanding money and cigarettes. The suspect then fled the scene in a vehicle before police arrived. No one was injured during the incident.

Police are releasing surveillance footage photos in hopes that, despite the quality, someone may recognize the individual or the vehicle.

The individual is described as a man with an average build, standing approximately six feet (183 centimetres) tall. He was wearing a black hooded sweater with orange lettering on the chest and the left arm, along with black and white gloves.

The vehicle is described as being a dark grey or silver four-door sedan.

Anyone who recognizes the individual or the vehicle in the photos, or who has information that could help further the investigation, is asked to contact the Codiac Regional RCMP at 506-857-2400. Information can also be provided anonymously through Crime Stoppers at 1-800-222-TIPS (8477), by downloading the secure P3 Mobile App, or by Secure Web Tips at www.crimenb.ca.