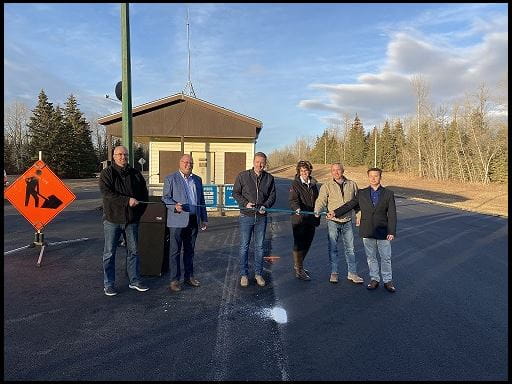 The drive in and around Battlefords Provincial Park is now smoother.

“Through our provincial stimulus package and partnership with the Ministry of Parks, Culture and Sport, we are investing in highways that lead to our many beautiful parks,” Cockrill said.

The project includes almost 24 kilometres (km) of paving on Highway 4, and Highway 204 as well as various roads, camp sites, and parking areas within the Battlefords Provincial Park. The Highway 4 section of the project begins about one km north of its junction with Territorial Drive. The five km section of improvements on Highway 204 runs from west of the junction with Highway 4.

“Battlefords Provincial Park is a popular resort for many families, particularly through the summer months,” Cut Knife-Turtleford MLA Ryan Domotor said. “These improvements will be very welcome for the thousands who visit annually.”

Potzus Paving of Yorkton was the general contractor.

The provincial government has made significant investments in provincial parks in recent years. Another $2.2 million is going to shoulder widening and surfacing on Highway 38 near Greenwater Provincial Park this year. Work is expected to be completed later this month.

The Government of Saskatchewan is keeping its 10-year Growth Plan commitment to build and improve 10,000 km of provincial roads and highways. Planned delivery over the first three years is more than 3,500 km, well ahead of the pace needed to meet our target.

Toys for the North: Spreading joy to remote northern regions of Canada since 2010