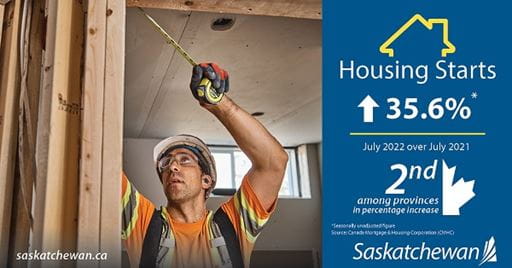 Urban housing starts in Saskatchewan continue to climb year-over-year with a 35.6 per cent increase in July, the second highest among the provinces.

“The Saskatchewan economy continues to grow,” Minister of Trade and Export Development Jeremy Harrison said. “With construction numbers continuing to rise, we are seeing strong investments and job growth in our province, indicating we are well-positioned to meet the needs of the people of Saskatchewan.”

This comes on the back of strong growth in other important economic indicators in June. Year-over-year, manufacturing sales grew by 25.2 per cent, the third highest among the provinces. Building construction investment also increased by 63 per cent in the same time frame; the largest jump among the provinces.