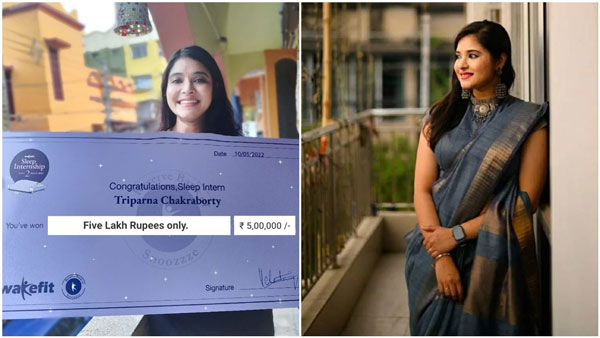 Everyone needs good sleep for good health and we all know that, but good sleep is not happen to everyone. Whatever the reason, it can be seen that many people cannot keep their eyes closed night after night. But Triparna, a girl from Srirampur in West Bengal’s Hooghly, won the prize of Rs 5 lakh (BDT 6 lakh) in her sleep.

People have different feeling about sleep. Some sleep on the train while others take sleeping pills to sleep. However, Triparna Chakraborty of Srirampur proved that crores of rupees could be won with gold. Sleeping is his passion since childhood. Sleep is his best friend. From a young age, parents did not have to complain about sleep. It so happened that Triparna slept in the train and reached Delhi. During the exam, he sometimes fell asleep. But he never thought that he would win millions of rupees from that sleep.

A mattress company organized a sleep contest. Enter the competition by doing MBA. In Triparna’s words, “When I came to know about such competition, I gave my name without a second thought. I just loved sleep but never thought that sleep would be the best of the best.

According to the organizers of the competition, in the 100-day challenge, each contestant was asked to sleep deeply for 9 hours a day. As seen in the sleep scores of each contestant, Triparna scored the highest. Her sleep score was 95 out of 100.

Triparna is working in a multinational company. The main office of the company is in the United States. So she works from her home in Srirampur. And she has to wake up at night to do this, and has to sleep during the day.

However, she has had various incidents with sleep since childhood. Ever fell asleep in the exam center while taking the board exam. Sometimes she slept there while giving an interview. In fact, this young woman sleeps when she sleeps. So for him such a competition was a great opportunity.

5 IS militants killed in Iraq