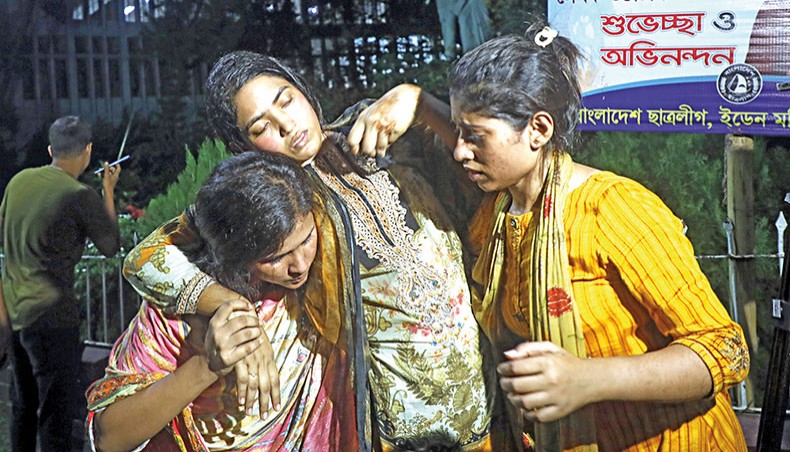 The academic council of Eden Mohila College, in a meeting on Tuesday, decided to take action against the students involved in seat trading, making ‘false’ allegations of forcing college students into committing immoral acts.

The council members said that they decided to take action in phases after further discussions among themselves.

On September 25, at least 15 activists were injured in a factional clash on the college campus between the followers of BCL college unit president Tamanna Jasmine Riva, general secretary Razia Sultana, and a large section of other BCL committee members.

Allegations had it that Riva and Razia were involved in seat trading, extortion, torturing students, controlling college hostels and canteens, and forcing college students to commit immoral acts.

After the incident, the college authorities formed an investigation committee, which, in a notification on October 6, said it found no evidence of forcing any student into committing immoral acts.

The committee said that the college administration would take further action as per the rules based on the inquiry report regarding the incidents of seat trading, fighting, and other complaints.

An academic council meeting was held following the submission of the report on Tuesday.

After the meeting, college principal professor Supriya Bhattacharjee confirmed that they had taken some decisions based on the report but did not elaborate.

Two committee members told New Age that there was consensus among council members over taking action against the students involved in seat trading, making false allegations of immoral acts, and being stubborn in their attitudes.

Another member said that the actions would be taken as per the rules in phases.

Some BCL Eden College unit leaders said that they had no other choice but to accept the probe committee’s finding that the allegation of immoral acts was not true.

On October 8, Samia Akhter Boishakhi, organising secretary of the BCL college unit, told New Age that she had made the complaint about immoral acts based on complaints made by others previously.

On September 26, the ruling Awami League’s student organisation BCL suspended all activities of its Eden Mohila College unit and expelled 16 members of a group from the organisation permanently for violating organisational discipline. Source : New Age