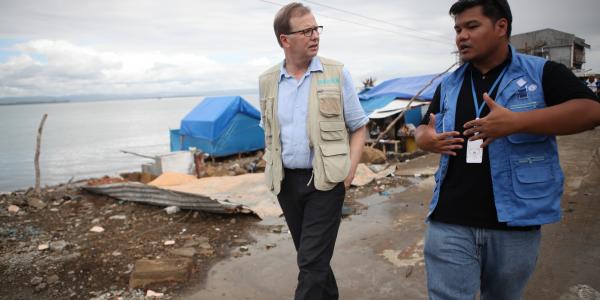 UNICEF Canada today announced that President & CEO David Morley will retire next year and step down from his role with the humanitarian organization after more than a decade of leadership.

From the narrow alleys in Brazilian favelas to behind rebel lines in the Republic of Congo and into the corridors of power in Ottawa, David has spent his entire career working for the rights of children.

Under his leadership, UNICEF Canada has continued its work defending the right to a childhood in Canada and abroad in the face of political instability, climate change, and the global COVID-19 pandemic. David will continue to lead the organization during the transition. The executive search process for his successor is already underway.

“It has been an honour to lead the UNICEF Canada team throughout our organization’s evolution and the challenges of the COVID-19 pandemic to stand with every child – everywhere,” said David Morley, President & CEO, UNICEF Canada. “While there is much still to be done, we have a lot of hope as we look toward the future. Child survival rates are up and under five mortality rates are down, and up until recently, record numbers of children were in school globally. UNICEF remains the world’s largest purchaser of vaccines. As part of the UN, our ability to work neutrally with governments, the private sector and civil society to generate results for children on a scale that is unparalleled. I am confident that my successor, working closely with our Board and staff, will be able to take that work even further.”

Before joining UNICEF Canada, David led Save the Children Canada, served as head of Medecins sans Frontieres (MSF) Canada, and won recognition for his writing of two best-selling books. His work with children of the street in Costa Rica led him to meet his wife Elizabeth, with whom he has two children. Some of his important work over the years includes the 2015 Rohingya refugee crisis and most recently, supporting the 5.2 million children in need of urgent assistance during the war in Ukraine.

David is also a Member of the Order of Canada, which recognizes his lifetime of outstanding achievement and service to the nation. After leaving UNICEF, David plans to volunteer with an environmental organization, continue to volunteer with marginalized children, spend more time with his family – including five grandchildren – and as much as possible, and play more hockey.

“It’s been inspiring to watch David lead UNICEF Canada over the years and to witness his passion ensuring children don’t just survive – they are given the tools they need to thrive,” said Chris Simard, who is chairing the UNICEF Canada Board of Directors CEO Search Committee. “David has a way of communicating with our partners, political leaders and internal stakeholders to help them understand the ongoing threat to children’s rights globally and what we can do about it right now.  He is a leader of action and vision.  I’m confident that UNICEF Canada’s strong position in the global charitable sector and continued leadership in child’s rights work will ensure a smooth transition for us during his succession.”

The transition to new leadership is expected to be complete by summer 2023.