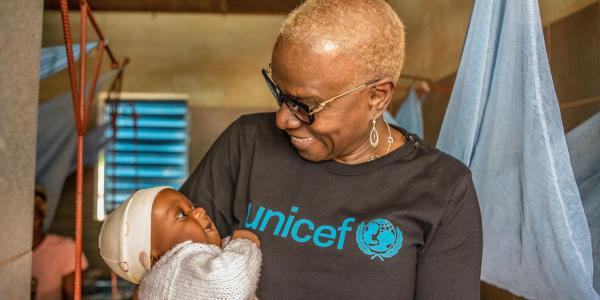 UNICEF Goodwill Ambassador Angélique Kidjo returned to her home country Bénin last week to meet children and young people impacted by the spillover of violence from the Sahel crisis and climate change in the region.

The deteriorating security situation in Burkina Faso, Nigeria, and Niger, as well as rising food prices as a result of climate induced shocks, are affecting access to essential social services for children, refugees, and internally displaced persons in northern Benin. In some border areas with Sahel countries, a number of schools have been temporarily closed, malnutrition in children under five has risen, while some health centers are facing challenges with maintaining operations. Local social welfare authorities have reported increases in domestic violence, gender-based violence, and violence against children.

“The northern part of my country has always had a special place in my heart,” said Angélique Kidjo. “These are remote areas where commodities are scarce. Yet, I was met with such resilience, such hope and strength from the doctors, mothers, teachers and everyone else who rally around children. Here are people who are determined to do what it takes to strengthen their community and to take care of one another, with the help of UNICEF.”

During the week-long trip, five-time Grammy Award winner Kidjo met with teachers, nurses, and health and social workers who are on the frontlines providing children and their families with access to essential services, as well adolescent girls, children and youth, who are championing change in their communities.

“What gave me strength is the engagement of the youth to tackle all the issues that are at the core of our mission as UNICEF,” said Kidjo. “I met a young girl who is only 16, so articulate, and so determined to promote social cohesion. She wants her community to live in peace and for that she gathers her peers every week to provide them with reliable information on how they can seek help, breaking taboos around issues that aren’t discussed in school or at home and empowering them to campaign against child marriage, early pregnancies, alcohol abuse and sexual harassment in and out of school. That’s the youth I want to see in every country I go to in Africa.”

In Benin, 3 in 10 girls are married before the age of 18. Kidjo met with adolescent girls who have escaped child marriage and have been reintegrated into their communities through vocational training opportunities and income-generating activities, such as sewing, cooking, welding and masonry.

Kidjo visited a nutrition center in Tanguiéta to see how health workers and mothers use local ingredients to prepare nutritious food to treat malnourished children, and how UNICEF’s supply of Ready-to-Use Therapeutic Food (RUTF) – a nutrient-rich, peanut-based paste – is helping to save these children’s lives. In Benin, 1 in 3 children under the age of five is chronically malnourished.

UNICEF is reinforcing its presence in northern Benin – particularly in border areas – to respond to emerging needs affecting children, including refugees.

“We are honoured that Angélique Kidjo could join us in the North to see and hear firsthand the work we are doing with the Government and other partners to safeguard children’s rights to education, health and protection, in a challenging context across the region,” said UNICEF Representative to Benin Djanabou Mahondé. “Now is the time for all of us to work much closer with communities to reinforce their resilience and, by doing so, ensure every child has continuous inclusive and safe access to affordable essential services.”

Kidjo visited schools and social promotion centers where she met with refugee children and adolescents from Burkina Faso, including 7-year-old Abass and 9-year-old Zawiratou, whose school was shuttered due to increased violence. The siblings were able to return to school after three years, thanks to the support of local authorities, UNICEF, and partners.

Kidjo returned to Benin while celebrating 20 years as a UNICEF Goodwill Ambassador. A tireless advocate for children’s rights, she has travelled around the world to support UNICEF programs. In 2017, she joined forces with seven of Benin’s greatest artists to produce a song calling for the elimination of child marriage, and in 2020 she recorded a new version of Miriam Makeba’s “Pata Pata”, which has been called the ‘world’s most defiantly joyful song’, to help spread awareness about preventing COVID-19. This is her first mission with UNICEF since the COVID-19 pandemic.

“We need to strengthen the ability of people to fight for themselves, to be strong enough to absorb the shocks and for our institutions not to be overwhelmed and break all of the benefits and progress we reached until today,” Kidjo said.

Take a Spin on the Rink on Wascana Starting this January