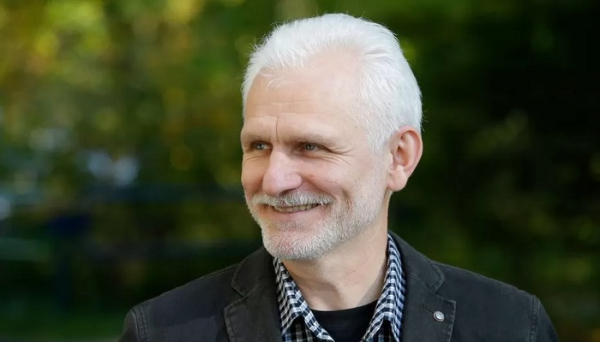 Ales Bialiatski is a prominent Belarusian human rights activist, who is currently being held in prison without trial.

Bialiatski, 60, is the founder of the country’s Viasna (Spring) Human Rights Centre, which was set up in 1996 in response to a brutal crackdown on street protests by Belarus’s authoritarian leader Alexander Lukashenko.

Viasna provided support for the jailed demonstrators and their families, documenting the use of torture against political prisoners by the Belarus authorities.

“He has devoted his life to promoting democracy and peaceful development in his home country,” said the head of the Norwegian Nobel Committee, Berit Reiss-Andersen, announcing this year’s three Nobel Peace Prize winners.

Bialiatski – who has received numerous international human rights awards – spent three years in jail after being convicted on tax evasion charges he has always denied in 2011. He was released in 2014.

He was detained again in 2021 following massive street protests over what opposition activists say were rigged elections that kept Mr. Lukashenko in power.

“Despite tremendous personal hardship, Mr. Bialiatski has not yielded an inch in his fight for human rights and democracy in Belarus,” she added.

Just before his arrest two years ago, Mr. Bialiatski wrote on his Facebook page that the Belarusian authorities “are acting as a regime of occupation”.

“Hundreds of thousands of demonstrators across all of Belarus, and hundreds [of them are] detained.”

The activist’s wife, Natallia Pinchuk, said she was “overwhelmed with emotion”.

“I express my deep gratitude to the Nobel committee and the international community for recognizing the work of Ales, his colleagues, and his organization,” she told the AFP news agency,

Mr. Lukashenko – described in the West as Europe’s last dictator – has ruled Belarus with an iron fist since 1994.

He has been allowing Russian President Vladimir Putin, his close ally, to use Belarus’s territory to launch deadly missile attacks on Ukraine and to send Russian ground troops and armory there since Moscow’s invasion began on 24 February.

Alongside, Mr. Bialiatski, the Ukrainian Center for Civil Liberties (CCL) is one of the three joint winners of this year’s Nobel Peace Prize.

CCL is one of Ukraine’s leading human rights organizations. It was founded in 2007 when leaders of human rights groups from nine post-Soviet countries decided to create a cross-border resource support center in Kyiv.

Since its founding, the CGS has monitored political persecutions in occupied Crimea, Ukraine’s southern peninsula annexed by Russia in 2014; documented war crimes and crimes against humanity during the war in Ukraine’s eastern Donbas region; and organized international campaigns to release the Kremlin’s political prisoners.

After Russia’s full-scale invasion of Ukraine in February 2022, CCL has engaged in efforts to identify and document Russian war crimes against the Ukrainian civilian population.

In a tweet after Friday’s announcement, CCL said it was “proud to be awarded” the Nobel Peace Prize.

Bangladesh’s economy is in quite strong position: PM